Spode and Buttercups and Dandelions

I have been taking advantage of a rare warm and sunny spring day to get into the garden to do some much-needed tidying. As an organic gardener I spend a lot of time digging up weeds. It's actually quite therapeutic! This year the buttercups are doing fantastically well. Buttercups are one of those weeds/wild flowers which are quite nostalgic because as children in the UK they are one of the first flowers to learn and to wonder at with their incredible yellow flower. As an adult the attitude changes as many regard them as pernicious weeds. Spode produced a pattern called Buttercup which became very popular, particularly in America.

In the Spode archive there is a record of a buttercup pattern which is a hand painted design recorded with pattern number 1/4265. This was produced on bone china in about 1885. It is thought to have been designed by Felix Xavier Abraham*, a fine artist, who worked at the factory between about 1882 and c1902. He was Art Director for a short time. Probably influenced by this hand painted design, Buttercup appeared in about 1896 in something akin to its most popular form, on earthenware, on Chelsea Wicker shape. It had pattern number 2/4187 and was printed in outline from a hand engraved copper plate and then hand coloured.

Also in 1896 a differently coloured version appeared with pattern number 2/4191 and called Mandalay. This was in reds and browns. However the best known version has pattern number 2/7873 and was first recorded in 1924 remaining in production until 1992. Many customers who wanted to add to their services asked for its reintroduction and this finally happened in 2000 but sadly was not the success it was expected to be.

The shape with its deeply fluted rim derives from the famous Chelsea factory in London. The embossed wicker weave is a design which was used at the Spode factory in the early 1800s particularly for dessert wares on both bone china and earthenware.

Although the revived shape was registered in 1890 the earliest pattern is not recorded in the pattern books until about 1892 as 2/3674 and the shape was described as Basket Work Chelsea Shape. Many patterns were produced on what was to become a well-loved shape.

Buttercup pattern features a wild flower and there was also another similar pattern featuring another wild flower called Cowslip. This latter was also printed and then hand coloured.
Charles Ferdinand Hürten (about whom I write in my blog Spode and Charles Ferdinand Hürten) excelled at flower painting in a natural style. 'Weeds' were not ignored by him and he painted pretty primroses, delicate daisies and wispy grasses. The image here is of a tray made in about 1865 with his study of a group of wild flowers featuring a fabulous dandelion. It almost makes you like dandelions... 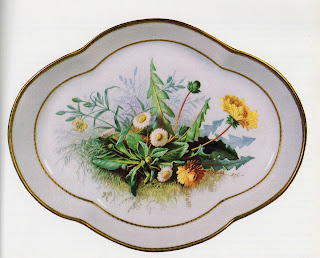 *Abraham is sometimes wrongly called Abrahams (including by me and Robert Copeland!). I am almost certain now it is without the S. I have also seen the name Francis Xavier Abraham and think this may be the same person; and in the Spode archive in a document, dated 1895, a signature Frank X. Abraham. If I can discover who is who I will add to this blog...
Posted by Pam Woolliscroft at 13:30

Pam Woolliscroft
Former curator of the Spode museum. Worked in 4 of Stoke's museums. Blogger & author. Fond of archives. Encourages a wild garden. Draws a bit. Blogs 'Spode History' and 'Spode ABC'. which have has been accepted by the UK Web Archive which preserves selected UK websites. Also blogs 'An English Garden' and 'A Royal Signals Sergeant'. Twitter:@PamWoolliscroft Instagram:@pamelawoolliscroft