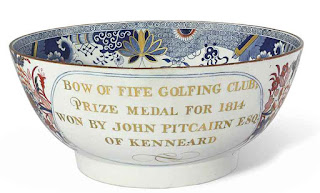 The earliest item, made by Spode associated with the game of golf is a large punch bowl sometimes known as The Pitcairn Bowl. I think it is the most beautiful golfing item too.

Dating from 1814 it is perhaps one of the earliest golf prizes known other than a medal. In Imari style it is decorated by transfer printing in blue, hand colouring and gilding with lettering in gold. In January 1994 it was sold by Phillips of Chester, England.


Mr R. G. Gowland of Phillips provided information about the bowl to the Spode Society for publication in the Review in May 1994. When the bowl was first offered for sale to Phillips for an auction of golf memorabilia it was:

Restored at a cost of £600 it was offered for sale on 21 January 1994. It reached a record-breaking price. The trophy is thought to be the earliest known golf prize which includes a date. The inscription, beautifully handpainted in gold and finished with a flourish, reads:

John Pitcairn, was a member of a family which owned extensive land in Fife. His home, Kenneard, was near the town of Cupar, in Scotland. The 'Bow of Fife Golfing Club' sadly no longer exists.

An article in the Spode Society's Review,1994, states that the bowl was on display at the Museum in the Valderrama Golf Club, Sotogrande, Spain. The Valderrama Golf Museum housed the Jaime Ortiz-Patiño Golf Collection. The museum opened in 1988 displaying items of fine quality connected with golfing history. These had been collected over a long period and, in 1994, the Spode bowl joined other important and exquisite pieces in the museum.

The Pitcairn Bowl is an excellent example of a special commission from the Spode company. As a 'one-off' it was not recorded in the Spode pattern books of the period. Special commissions from the company number in their thousands but as they were unlikely to be repeated were rarely recorded. They make exciting finds, such as this bowl did in 1994.

On 16 September 1899 registration for a design of golfing subjects was granted by the British Patent Office to W. T. Copeland & Sons, owners of the Spode company at the time, and given the registration number 345322. This was described as 'golfing embossment for a slab'. Slab is the term used at the Spode factory for a large plaque or tile which could be used as architectural decoration, for example set into a wall or fireplace. A plaster cast of the original slab is in the Spode museum's collection (WTC 2000.188).


The slab depicts a number of golfing subjects:
This raised ornamentation, or sprigging, appears on other pots as well as the slab and, when featuring golfing subjects, these are usually seen in grey stoneware combined with dark blue and the figures in white. The golfing figures were applied by sprig moulding - a thin piece of clay from a sculptured mould is laid upon the clay surface of the object prior to firing. The object is then glazed and subject to a further firing. Other objects known in this range are:
Little information is recorded in the Spode archive about this sprigged range but an entry in the pattern book in about 1900 illustrates pattern number 2/4737 as a sprig moulded golf pattern and is described as a 'sage and cobalt 3 handled mug, gilt'. The range of wares in the grey stoneware is also known from an old photographs. Theses record a biscuit barrel, water jug, large bowl and two jars or small vases (precise use uncertain) as well as the teapot and beaker. Although the date range for the golfing wares in this style is not known exactly, this type of sprigged stoneware was made by the company until the 1920s.

In the latter half of the 20th century golfing subjects were used on a range of ware from about 1955. These were in the Fortuna range - a combination of Flemish Green (a green clay) and Imperial (an ivory clay). Tankards and jugs were made using golf subjects. Although similar in appearance to the earlier sprigged stoneware, this time the items were not made by applying sprigs but were cast from moulds and do not have such fine detail. The main range of subjects featuring moulded decoration in the Fortuna range was of hunting and tavern scenes. The handle of the tankard was modelled as an elaborate riding whip and this was not changed when the subjects were golfing scenes! The Fortuna range dates from 1955 to 1960.
In 1965 a special commission was produced for the Professional Golfers Association. Decorated in a design based on a pattern called Ermine, the piece known is an ice bucket. Unfortunately no further information has been discovered other than one black a white photo depicting the piece so it is uncertain if other items were made.

In 1991 a collection of fine bone china giftware was introduced by Spode as a tribute to golfing history - The Golf Collection. The larger items were offered with the opportunity for the piece to be inscribed in gold to make a unique golfing trophy.


The following items were produced in the range which continued until about 1997:

Unlimited items:
Another range of items is known to have been made in conjunction with a Scottish antique dealer in the 1990s as a special commission but no records are in the Spode archive. In 1992 pattern F1754 was recorded for 3 plates which were produced for the Open Golf Championships in a limited edition of 5000 each. These depicted golf courses of Great Britain:
Pattern F1755 also of 1992 was a plate for United States Open Golf in a limited edition of 5000 of Pebble Beach Golf Course. Also in the 1990s the Spode company had a demonstration department open to the public. Here the artists painted pieces with golfing scenes which were never recorded in the pattern books and were individual pieces sold through the museum's shop on the factory site in Stoke-on-Trent. The artists working on these pieces were usually Ken Pickin and Bill Hall (W. Hall).

The Spode Blue Room Collection of blue printed items launched in the 1990s also features golfing designs on items such as mugs.

More images can be seen by clicking HERE> to go to Spode and Golf; and HERE> at blueandwhite.com 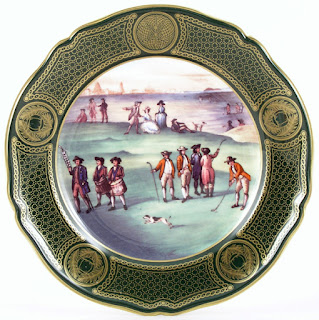 Pam Woolliscroft
Former curator of the Spode museum. Worked in 4 of Stoke's museums. Blogger & author. Fond of archives. Encourages a wild garden. Draws a bit. Blogs 'Spode History' and 'Spode ABC'. which have has been accepted by the UK Web Archive which preserves selected UK websites. Also blogs 'An English Garden' and 'A Royal Signals Sergeant'.